As a participant in the ThyssenKrupp Materials NA Sales Talent Development Program I am in my third rotation of working at different TKMNA Divisions. My current home is at Copper and Brass sales. I was hired by ThyssenKrupp out of Central Michigan University, where I majored in Law and Economics (Econ. Degree). I learned about ThyssenKrupp through my professional sales and marketing fraternity, Pi Sigma Epsilon. Representatives from ThyssenKrupp Materials NA came to one of our networking nights and I got to speak face to face with Heather Clark, Director of the talent program and Evan Van Buhler about the STDP and the different MBU’s of TKMNA. I was interested in ThyssenKrupp because I knew that it was a huge company where I could grow and develop in-depth knowledge of different industries and have a wide variety of experiences.

The TMX Aerospace Division of ThyssenKrupp Materials NA hired me straight out of CMU and I spent almost three months in Seattle this summer learning about their business. I really enjoyed my time with TMX this summer, and I look forward to heading back to Seattle, once my time in the Talent Program is done, to start my new role with them. For the past two months I have been with the AIN Plastics Division which is based in Madison Heights, Michigan. My experiences with AIN Plastics have been wide-ranging and I have really enjoyed my time working with the team at AIN. During my three months my I spent time with the Inside Sales team, Outside Sales teams at several branches, the Business Development team in Kennesaw, as well as time in the warehouse in Madison Heights and the machine shop in Kennesaw, Georgia. During my rotation with AIN, I have also had various projects that were assigned to me. These include reports on: productivity, consignment, CRM tools, and long-term projects involving the other members of the STDP and our mentor projects. These projects have been invaluable to me, in terms of working on my time-management skills and increasing my knowledge of AIN’s business processes. They have helped me to build skills that I will carry into my new position once I return to TMX Aerospace. Additionally my rotations are giving me a better understanding of ThyssenKrupp Materials NA as a whole company. 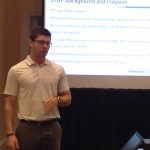 Meetings and Presentations for the AIN Team 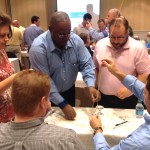 It takes a team to build 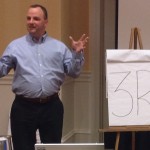 Lastly, during my AIN rotation I was fortunate to be invited to take part in their National Sales Meetings and President’s club Awards Banquet where AIN team members are honored for achievements over the past year. It was an amazing experience. I attended Branch Manager meetings where I got to see some of the metrics that are used to gauge AIN Plastics performance each year. From there we all attended breakout sessions where we brainstormed idea’s to save money and increase revenue. I learned a lot from spending time with people who have been with AIN Plastics and in the plastics industry in general for many years. The rest of the time at the National Sales Meeting was spent with representatives from some of our suppliers and then we had the presentations for The President’s Club Awards. I really enjoyed my time at the National Sales Meetings. It was a time where I formed some great relationships with various AIN employees that I know will last into my future years with ThyssenKrupp. (See more about the AIN Plastics NSM and President’s Club Awards)