In this week’s blog, we have a guest writer here to give us insight into how plastics have affected orthotics and prosthetics. Michael O’Connor has been an Occupational Therapist since 1994. He is now the Executive Director of O’Connor Occupational Therapy Services, PLLC. He works diligently to provide services to amputees, wheelchair users and others.

It’s Been a Big Year in Orthotics and Prosthetics In addition to celebrating holidays and setting New Year’s resolutions, as we end  2012 we tend to see year-in-review articles about significant stories during the past 12 months.  Not to be lost in the highlights of election year politics, extreme weather, and World Series disappointment, the year 2012 has been a remarkable year for individuals demonstrating accomplishments can be unlimited despite a “disability.”

Oscar Pistorius – “The Fastest Man on No Legs” In August, Oscar Pistorius (www.oscarpistorius.com), a 25 year old South African sprinter,  made history  as the first amputee to compete in the Olympics running the 4×40 relay and 400 meter sprint.  Pistorius was born without fibulas (one of the bones in the lower leg).  His legs were considered not capable of bearing weight without fibulas, so both legs were surgically amputated before he was 1 year old with the intention he would develop more naturally into bilateral prosthetics. The carbon fiber blade prosthetics (called Cheetahs) that he runs on have earned him the nickname the “Blade Runner.”  Before this Summer Olympics Pistorius has been celebrated beyond South Africa and the Paralympic community for the 4 gold medals he holds from the 2008 Paralympic games.  He holds the world record in 200 and 400 meter events competing against single-amputee athletes.

Qualifying for this Summer Olympics to run on blades alongside able-bodied athletes required winning court hearings as well as winning track event trials to represent South Africa at this summer’s Games.  Pistorius was originally banned from Olympic competition by the International Associations of Athletics Federation who deemed the carbon fiber blade prosthetics give him an unfair biomechanical advantage over his able-bodied competitors.  As the appeal went on, reports from those hearings and media outlets detailed arguments on both sides regarding the biomechanical breakdown of formulas of momentum, acceleration and speed in comparing the blade prosthetics to human legs.

Pistorius did not medal in the 2012 London Olympics but his challenging and winning the opportunity to complete, and his physical and athletic prowess on the track as well as his grace in interviews stand as an inspiration to us all.

Tammy Duckworth – From Iraqi Vet to Illinois House Candidate In September perhaps you saw Illinois’s 8th District U.S. House Candidate Tammy Duckworth (www.tammyduckworth.com) deliver a speech at the Democratic National Convention.  You most likely paid attention when she walked on stage. If you didn’t recall her bright red blazer, you noticed that Duckworth is a double amputee. She walked on stage on bilateral prosthesis, using a single point cane. She is a decorated Iraqi War veteran. Both of her legs were traumatically amputated when a rocket propelled grenade exploded in her lap as she piloted a Black Hawk helicopter near Baghdad in 2004. She is like the individuals that I serve. She did not die. She survived. And she chose to continue to live. Those that I work with will tell you there is a distinction between surviving, and continuing to live. In her DNC speech Duckworth noted “At the hospital (Walter Reed), I realized my new responsibility: to honor the buddies who saved me by serving our military men and woman.” She went on to become the Director of the Illinois Department of Veterans Affairs.  In November Duckworth was successful in unseating the incumbent from Illinois 8th District to the U.S. House of Representatives. Duckworth stands as an example of both the war tactics of the insurgent enemy forces, as well as the advances in heroic trauma care our military medics provide on the front lines for our U.S. service men and women with increased survival rates of multi-limb traumatic amputations in the war in Iraq and Afghanistan. A recent USA Today article cites Army data counts of 36 triple amputees and 4 quadruple amputees in Afghanistan since the 2010 surge in U.S. troops alone.

Taylor Morris – Lost all Limbs and Learned to Dance Again Perhaps in 2012 you followed the story of Navy EOD (Explosive Ordinance Disposal) technician Taylor Morris (www.taylormorris.org) who in May 2012 whose combat injuries resulted in loss of all 4 limbs.  His story is remarkable in terms of his significant accomplishments in just 6 months in using the most current technology of metals and plastics in orthotics and prosthetics which have allowed him to regain an active lifestyle that includes walking, dancing, kayaking, and driving. In November President Obama recognized Morris on Veteran’s Day via the President’s Tumblr account:

“As Taylor lay there, fully conscious, bleeding to death, he cautioned the medics to wait before rushing his way. He feared another IED was nearby. Taylor’s concern wasn’t for his own life; it was for theirs. Eventually, they cleared the area. They tended to Taylor’s wounds. They carried him off the battlefield. And days later, Taylor was carried into Walter Reed, where he became only the fifth American treated there to survive the amputation of all four limbs.  Now, Taylor’s recovery has been long, and it has been arduous, and it’s captivated the nation. A few months after the attack, with the help of prosthetics, the love and support of his family, and above all his girlfriend Danielle, who never left his side, Taylor wasn’t just walking again. In a video that went viral, the world watched he and Danielle dance again.” Morris received the Purple Heart in July. His 6:36 minute You Tube video “Unstoppable” will inspire you, may change the way you view people with disabilities, and may change how you view your role in plastics and plastic’s role in changing lives.

The Everyday Heroes – Who do You Know? The men and woman whom I treat as an occupational therapist are quiet heroes. Humble. Hardworking. Survivors. They are dedicated to their recovery and to their families.  They are ordinary people who do extraordinary things.  But you are not likely to see them on the evening news or sports highlights. However when stories of triumph and inspiration do make the news as they did in 2012, I believe it benefits the broader rehabilitation and disability community with increased awareness and dispelling stereotypes. Having worked in the field of rehabilitation since 1988 the past 24 years have been an exciting period with the technological advances that benefit individuals recovering catastrophic injury or illness to live safer and more independently.

We are seeing people accomplish things today that would have sounded like science fiction when I became an occupational therapist in 1994.
Computer related technological advances such as smart phones with an endless array of apps can provide scaffolding of compensatory strategies for person’s with cognitive disabilities. Assistive technology and environmental controls allow person’s with spinal cord injuries to turn on lights, adjust thermostats, and answer phones with voice command, puffs of air, use of trace muscle movement in hands, or through neck and facial muscle movement.
Advances with medical grade plastics and metals have revolutionized patient care as it relates to items such as wheelchairs, orthotics and prosthetics.
Current wheelchairs made of titanium and medical grade plastics are significantly lighter weight than their predecessors which allow less effort for the user to propel the chair as well as less effort for any family member or caregiver who may assist loading or unloading the wheelchair from the back seat or trunk of a car. These wheelchairs do not compromise durability for lighter weight.
Current medical grade plastics for use in orthotics such as splinting material for creating hand splints are superior to those available 20 years ago. Current plastics heat at a lower temperature and they are more pliable resulting in a material that allows a clinician increased ease to customize and modify in cutting and molding splints and orthotics.  These plastics are stronger than past generations of plastic which have resulted in design of lower profile splints and orthotics than in the 80’s and 90’s which results in improved fit, increased comfort, and increased patient compliance with progress recovery.
As with orthotics, the advances in metals and plastics with prosthetics have allowed individuals with amputations to accomplish extraordinary things. 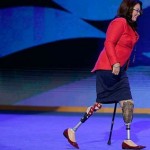 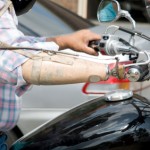 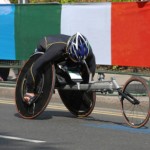 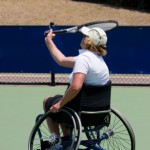 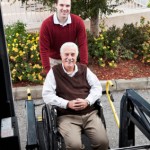 Thanks to advances in plastics prosthetists can now create a prosthesis that has an improved fit on the residual limb, improving comfort for the patient. These prosthetics are lighter weight without compromised strength or durability, allowing the user to move with less effort for increased ambulation, which means carryover for functional use and increased independence.
The patients I work with, the neighbors in your community who benefit from current grade of medical plastics in orthotics and prosthetics, may not be competitive athletes breaking boundaries as they make history in the Olympics.
They may not be U.S Army veterans who have traveled the long road from the lying on the floor of dessert with their legs traumatically amputated by an R.P.G. to walk the stage at a National Convention and be elected to the U.S. Congress.
But their accomplishments measured in terms as it relates to daily function are no less meaningful.
There is dignity in the woman who, on her prosthesis, can walk to the bathroom through a door that her wheelchair won’t fit through, instead of using a bed side commode that someone else has to empty.
There is inspiration in a man who, on his prosthesis, can proudly walk his daughter down the aisle at her wedding. No gold medal, but no less inspirational.
The college student whose light weight wheelchair that allows him to begin to feel “normal” as he recovers from a spinal cord injury and independently access his dorm and classes at a local Big Ten campus, could be the catalyst that brings revolutionary change to the next 25 years.

Due to plastics for orthotics and prosthetics it’s looking like a very bright 2013. I wish everyone the best in 2013. Happy New Year!

To learn more about plastics that are used in orthotics and prosthetics, contact AIN Plastics: 877.246.7700 or visit our website: ainplastics.com